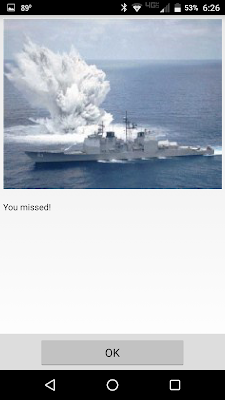 This was by far the most unique, and probably the most frustrating, wherigo that I have ever done.  We spent a good hour or more walking around an empty grass field playing virtual battleship. 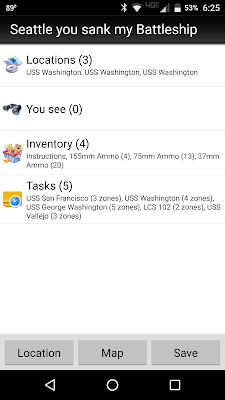 From the cache description:

"You ought to sink all battleships before your ammo runs out. To begin the game, stand inside the middle of the field and select the "Start Game" object.

The ships can be hidden from view till you harm one. To shoot in which you’re status, choose the caliber shell from your stock and click the "Fire!" button. All ships in the shell’s vicinity of impact can be damaged.

To win the game, you have to sink all five ships before your ammunition runs out."

The location takes you to an empty field, bordered by trees, across from a very popular lake with busy walking trails.  Even though this is a VERY popular area, we had the patch of grass to ourselves.

You cannot save this game.  And when you restart the game, the locations will not be exactly the same – so just because you sunk a ship from one spot, does not mean you will sink the same ship in a new game, from the same spot. 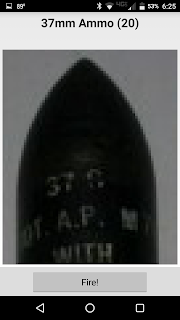 You start by firing ammo, blindly.  When you hit something, you will then be shown how close the ships in that group are, so you can sink all of them.

You have a limited amount of ammo.  My strategy, after the first practice game, was to shoot fairly large ammo in any direction to locate the ships, then use smaller ammo to sink them. 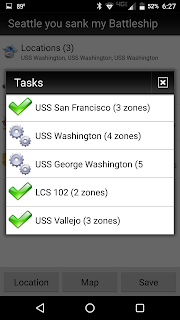 Dan and I were both playing simultaneously on two different phones – two separate games.  We’d mark the areas we found ships with our shoes, camera, key fob…  because even though the locations were not the same, the general area would often get us close to something.  It took me two games to actually get the hang of it, and it was on the 3rd game that I finally won.

Then in an extra frustrating ending – the actual final for the geocache is pretty far away!  As if we hadn’t already spent the entire day walking…

But all in all we really loved this.  So much so that Dan is hoping the owner will share the cartridge so we can recreate it here in PA. 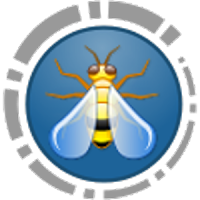 We both played on Android Phones   – Me on a Note 5, Dan on a Turbo II.  We both use the Where You Go App for Wherigos –https://play.google.com/store/apps/details?id=menion.android.whereyougo&hl=en